The story of this 1965 Mustang pretty much started around March 20, 1965 in Omaha, Nebraska for $2715.00. My mom still has the original invoice from when she ordered it new at age 19. It is kind of fun to look at as you can tell that someone had to type it out on a typewriter as some of the letters don't line up with the rest of the line typed. This is something that most young people will never see unless looking at old documents.

This Mustang would be my mom's first car. My mom took after my grandfather on taking care of their cars. People would tell her that she was going to wash the paint off the car because she washed it so much. She said it was one of the first ones that she had seen around Omaha.

Come 1968 and she sold it to my aunt when my mom bought a 1968 Torino. This Mustang was then my aunt's first car. My aunt would go on to keep the car for the next 18 years. During this 18 years it would travel around the US from Omaha, to Orlando, California, San Antonio, Houston, Dallas and even made the trip on a boat to Germany for a year or so, since my uncle was in the Air Force and was stationed there.

Dallas 1985 my aunt had given it to my cousin. This Mustang was then my cousin's first car. She had driven it most of her junior or senior year of high school, but had decided to get a different car since it did not have air conditioning.

1986 my grandparents had bought it from my aunt and uncle and flew down to Dallas and drove it back up to Omaha. They drove it around Omaha for the next 4 years. In fact my grandfather had driven me out to Lake Manawa in Iowa and let me drive it around a parking lot when I was 11 or 12. 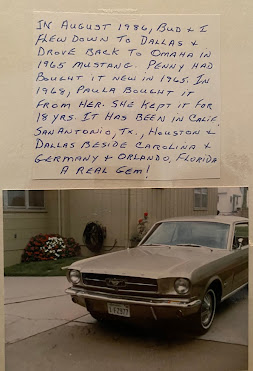 1990 Harry, my parents and I drove up to Nebraska for our summer trip. My grandparents then gave Harry the Mustang to drive when he was 17 before his senior year. The Mustang was now Harry's first car. The Mustang then made the drive back down to Houston. My freshman year, Harry's senior year, Harry would drive us to school. Harry would go on to drive it until he graduated high school. After high school, since he was going to go to school up in Huntsville to Sam Houston for college, my parents let him drive my dad's truck to school. The truck wasn't even a year old yet, and they didn't want him driving the "old" car back and forth each weekend. 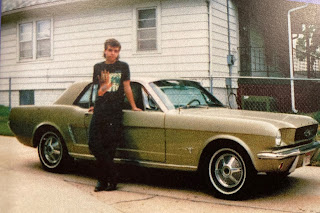 My dad drove the Mustang for maybe a year or so. 1992-93 I was taking body shop in high school and brought the car up to the school and did a little bit of work on it. There was a little bit of rust coming through from the years from being up in Nebraska and the salt that gets put on the roads in the winters.

In 1993 it was then my turn to drive it. The Mustang was then my first car. I would go on to drive it for the next two years. Working on it as I was driving it. In fact it has been half primer gray for almost as long as it was only Honey Gold. 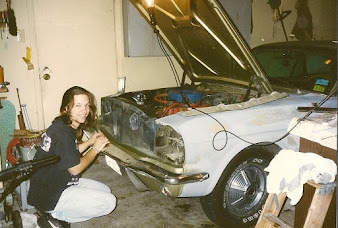 After I graduated in 1995, my job out of high school had me driving around Houston quite a bit, so until I got a new car that summer, I drove Harry's truck and Harry drove the Mustang while back from school.

1998ish I decided to pull the engine out and rebuild it. The car still took leaded gas, and so until rebuilding it, we had to put lead additive in since leaded gas was no longer available. After rebuilding it, we took it to a mechanic to get the timing done on it. Well it sat there until at least 2000-2001. My dad drove it home and backed it into their garage. 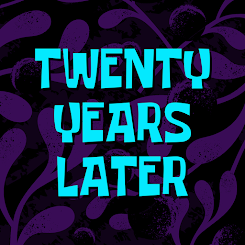 With absolutely no work done to it, or even the engine started in twenty years, I finally put new tires on it and had it pulled out of my parents garage and brought up to my house to start from where I left off.  I had talked about it being my son's first car, but he never really seemed to have any interest in it. 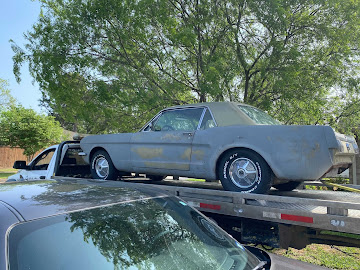 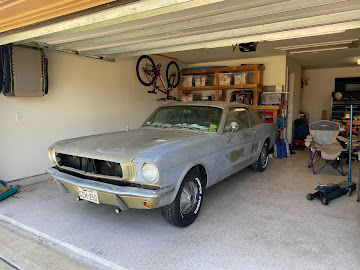 This Mustang is a connection to my mom, aunt, uncle, cousin, grandfather, grandmother, brother and my dad. It has given me a distraction from Harry not being around. Though there are plenty of memories of him in it, I am able to sort of separate in a way since he had no interest in working on it. Everything else that I have, there are constant reminders of Harry, and I needed something else that I could spend time doing. 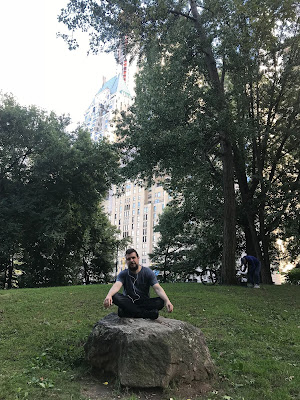