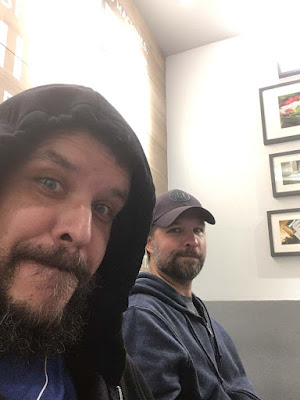 This weekend just past was when I began my attempts at walking like a human again. Up and down stairs even, without a cane, one foot in front of the other. With mixed success. But you’ve got to start somewhere.

My brother, whose name is Jeff and who is the eternal helper to all of those requiring help, came by to wash dishes, to wash clothes, and to help out with those tiny tasks which require some degree of bending over. I remained in my bed as he cleaned and as he intermittently played John Fogerty’s “The Old Man Down the Road” on my electric guitar. This latter bit was, naturally, a not-so-subtle swipe at my infirmity but also a kind of psychic payment for his selfless assistance and so I let it go. Gift horses, mouths, and all that jazz.

At some point in the evening, I do not know when, the rains came and Jeff called out to me from below: “Harry, come take a look at this!” Slowly though as quickly as I was capable, I shuffled down my stairs, clutching the handrail, feet pointing outward in the manner of the most awkward of birds. I made it.

Jeff and Astro stood at the sliding glass door at the rear of my home. “Am I sleep?” Jeff asked me.

I still do not know the answer to that question.

I still do not know what it was I saw.

Outside my sliding glass door, there is a lighted driveway. There is a dirty carport. There is a fence. And on the night on which my brother came to clean, it appeared to me there was a triangle, three feet per side, in which no rain fell. Hovering, I suppose. A little above the rain-soaked driveway.

Though the rain fell, and heavily, I was able to see through it to the carport and the fence beyond without so much as a single drop of rain blocking my view. Through the triangle.

My spatial recognition is what it is and so I reasoned that the triangle must be some sort of tunnel for, you would agree, a mere triangle or even a pyramid in space would nevertheless leave space behind it, between the triangle itself and the carport and fence, through which I would see rain. I am describing the indescribable badly but I say that move around as I would, up, down, to the right and to the left, I could not perceive any depth to the thing. It was only a triangle.

We stood there, Jeff and Astro and me, staring, momentarily transfixed by the anomaly. Finally, Jeff said, “My phone is in my truck!” and ran for the front door. I, with my apparently humorously shuffling gait, made my way through the laundry room to the back door, for I never use the sliding glass one. Astro merely stood there, staring, though I wonder what it was he believed himself to be staring at.

By the time I made it outside, the triangle was nowhere to be seen. Of course. I stood in the driveway, in the rain, calculating where it had been. And Jeff, he joined me, phone in hand at the ready.

The triangle was gone. Of course it was gone.

“I am going back to bed,” I said and ever true to my word, you can trust me, went back to bed.

I awoke. The rains had stopped. I embarked upon the long-term project that is descending my staircase again. Downstairs, Jeff was scraping at a pan whose time had probably come and gone during the Bush Era.

Standing at the sliding glass door, I said, “Hey, did we-?”

Jeff said “Nuh-uh,” setting down the pan. Jeff said, “Never mention that to me again, okay?”

And so I will not mention it, nor dwell upon it, for some things cannot bear contemplation. Maybe it was nothing at all. I leave it now over to you.