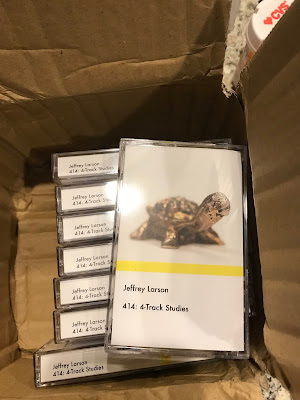 Stop, stop. There’s something I want to tell you. I’m going to stop what it was I was telling you before, at least for now, about Adri and Katy and Nasreen, and I’ll tell you this instead:

My little brother has released a music album.

Way, way back in the Nineties, which was very long ago, my little brother sat in his room and he played with my guitar. The guitar was blue and white, a Fender Stratocaster, which I still have in the other room, here at the townhouse, meaning I should say, probably, “is” not “was”, though it’s been ages since ever it’s left its big black box.

Back there in the Nineties, while I was far away, paying to be brainwashed about history, and then about law, and then about theology, my little brother was back home and playing my guitar. But he didn’t play guitar like you would play it, or like I would play it, no. No strumming or chords or choruses or verses for him. He played it like this instead: He played little sped-up tape loops, echoing like shimmers for a while or like oil on water, which would soon fade away to make room for more shimmers, and more, and away down they’d go. Slowly. And so on.

I’m not sure quite how it worked, to be honest. You’ll have to hear it for yourself.

After my little brother recorded his tape loops, more or less he forgot about them. They remained in boxes, in his closet, or else scattered across the floor, or else piled on top of Dr. Seuss books, lost in our parents’ storage space, much like all those novels I’ve written over the years.

There’s nothing wrong with that. Far be it from me to ever say there’s something wrong with that. It does not diminish one’s creation to create a thing and then to leave it be. Fernando Pessoa, who is a famous dead writer from Portugal, well, he hardly published a word in his lifetime. And when he died, people entered into his apartment and they found his now-most beloved writings within a big trunk at the foot of his bed. And Kurt Vonnegut had Kilgore Trout, his alter ego for nearly half a century in his books, write short story fictions only to burn them. Upon completion, having completed them, Kilgore Trout would burn them. So it goes.

But the story of my little brother’s tape loops didn’t end there. His shimmerings of old have been released, by some London-based avant-garde record label, both for download, which is something we didn’t know about yet in the Nineties, and on cassette tape, which I had almost forgotten about.

Isn’t that cool? Here, have a listen:


I’m very proud of my little brother, even if this doesn’t mean fame or fortune or influence or laudations. He has cassette tapes now which he can take and he can show you and say, “Hey, look what I made.”

And now that my little brother has achieved the status of a recording artist, I feel as though the time is ripe for me to grab hold of his coattails. I feel as though I should remind him, first chance I get, of the one-off, one-take collaboration between me and him back in 2012. He played guitar while I was reading a story of mine. This was pleasing because, for those very many people with whom Jeff’s shimmerings just can’t connect, they can listen to my story instead:


O, I’m not saying all the time. Not on every track. He could just drop them in a little, here and there, like Eno did with “Another Green World,” for landmarks and for variation. Words give a listener something to grab onto, amidst all the shimmering and whatnot.

And if it’s words he’s looking for, then, as a great man once said, “I know words. I have the best words.”

Congratulations, Jeff. You are amazing.
adri albums eno jeff lesbians in my soup