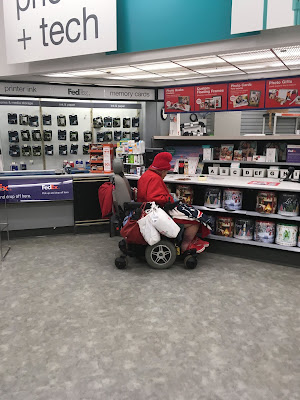 In the dark, beyond the hedge, the Lady Who Lives in Walgreens was outside of Walgreens. I came near tripping over her. Over her wheelchair. You’ve got to pay some attention, out in the world, it’s not like in your home. No autopilot here. There could be a lady in a wheelchair, in the dark, just beyond the hedge.

I tried to play it off, pretend, act as though I hadn’t really nearly tripped over her and over her wheelchair. I said, “Hi!” I said, “What are you doing out here?”

She said, “The night manager doesn’t come ‘til 2.”

I was not sure if that was responsive.

The streetlights, though making the nighttime navigable, to the extent it is navigable, what with all the nearly tripping, turns street scenes to sickly orange. Sure, you won’t notice it much, not normally, no, but snap a picture, look at it later on, all you’ll see is sickly orange.

She said, “I’m waiting on the mere emperor and watching the stars.”

I was not sure if that was responsive. There are no stars, not in the Houston sky at night, or maybe just three, or maybe, on a clear night of exceptional clearness, of clarity, twice a year at tops, four. This was not a clear night.

I handed her a bag of Lays which are potato chips. Western Coast truffle fries flavored. Her favorite, I knew. I sat on the curb and I unclicked my wine.

She said, “Are you sad?” Her mouth was chomping chips now.

She shrugged and watched for stars. All I heard now, to be honest, was that chomping, the sound of eating being the primary of my many pet peeves, as they are called, for some reason. It even drowned out the other sounds, the ones I knew had to be there but unheard, among which I will list the cars zooming past Kroger, the shadowed men off arguing somewhere, the giggle of well-coiffed suburban kids making their way to the clubs, and pigeons.

The Lady Who Lives in Walgreens said, “I used to dance. It’s not something you can tell someone how to do. Or when. Not really. If I wanted to dance, I danced. If I didn’t, I didn’t.” I was not sure if that was responsive.

I drank and the Lady Who Lives in Walgreens chomped and when she said, “There!” I looked up just in time to see, in a break in the clouds, the long green streak of a shooting star.

She said, “See? I told you. Stars.”
blogs stars wine