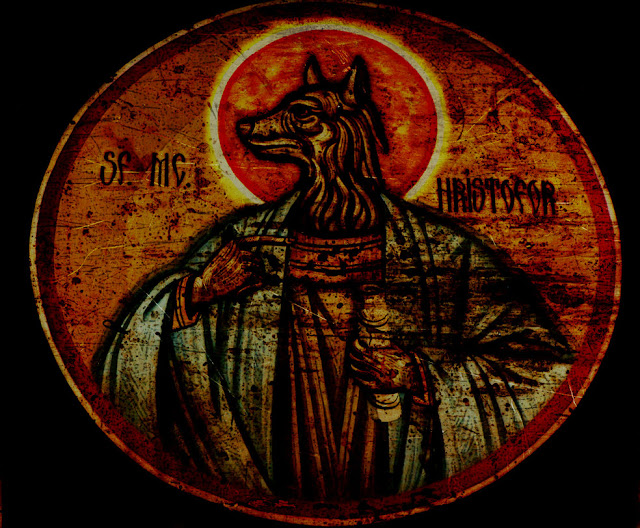 Hard to watch, hardest to listen to, so it has always been for me. The tearing, the chewing and ingesting, right out in plain view, too – in public! – whereas it seemed to me such activity should be confined strictly to the private sphere, like in using the toilet or pleasuring oneself. Ah, it was a lost cause. Thoroughly established in the culture.

Still the relief I felt as Buck paused in feasting to pick up with his story was not a thing of insignificance. He said,

“Dear Saint Christopher,
protect me today in all my travels along the road’s way.
Give your warning sign if danger is near
so that I may stop while the path is clear.
Be at my window and direct me through
When the vision blurs rom out of the blue.
Carry me safely to my destined place,
like you carried Christ in your close embrace.”

Buck said, “Yes, that was the ticket. Those were the magic words.” His sales went up and then no more flat tires and he expanded into white bass, crappie, and walleyes. If he were to say, by way of example, “Dear Saint Christopher, let me sell twelve walleye at this next stop” – walleye in particular – then he would sell precisely twelve walleye at his next stop and no more and no less.

Years went by and he went on selling fish, more fish than you could shake a stick at, if you had a stick and for whatever reason wished to shake it at some fish.

But then this happened: Along I-29, just south of Council Bluffs, down where the hills were plenty and solid yellow lines the rule, a maniac drove up on him. Right to the bumper complete with flashing lights and hand gestures. And the maniac came out around into oncoming traffic, too, threatening and looking to slam against him. Out of control.

And Buck had never thought to do such a thing before but he said, “Please, Saint Christopher, may this man’s tire blow out, on the front passenger side,” and no sooner said than there appeared sparks and the offending car went veering down a convenient (or an inconvenient) embankment. This was new. A new level of interdiction he meant intercession.

That night at a motel called The Bilingual, implausibly. Buck looked through rusted Venetian blinds when who should get dropped off but our maniac, who proceeded to the office, paid his money and took the key to the room right next door. And with Buck’s fish truck just out front, too!

He knew. Our maniac knew. Of course he knew. Buck heard him outside his door, saying, “O, you’re in for one ass-whooping now!” but Buck hid inside quaking. After many hours of night spent in this quaking, staring into the darkness, Buck said, “Please, dearest Saint Christopher, do something! Take care of this maniac for me just this once in order to save me.”

The words were said and they could not be taken back, and no sooner said than Buck heard in the darkness a shuffling. Someone and maybe it was none other than Saint Christopher himself arose from the chair near the bed, unlatched the door, and departed. From next door, the screams and smashing, they were awful until Buck pressed the pillow down and around his ears.

Morning came and the flashing of police lights. Buck took his breakfast at a shop across the street to watch. He saw the gurney with body bag pushed off as he read the morning paper. What caught his eye was this:

“The Church has announced measures to ‘clean up’ the existing calendar by removing several saints for whom it finds there is insufficient evidence of their having existed. These saints include Saint Christopher”-

Buck said, “You don’t know what shaking is, Harry. A shaking deep down inside that never stops even after years of shaking.” And no more praying to Saint Christopher, of course, it could never be done again. Sales or no sales. Fortune or no fortune.

There was no fortune.

Forty-eight years later and my breakfast partner was staring out the window. Eyes redder, yes definitely redder than at the start. Then he met my gaze.

He said, “Tell me, Harry, I ask you: If Saint Christopher never existed, then who – or what – was it that killed that poor man for me all of those many years ago?”

This was last time I was ever to have breakfast with Buck.
mostly fiction multi-part things saint christopher