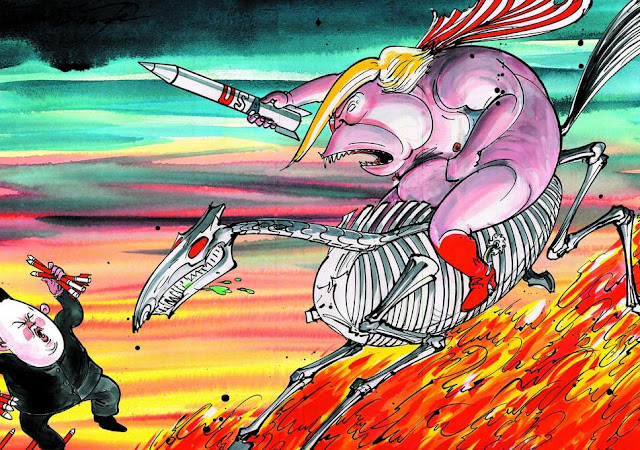 
I mention him here and now and I am sorry for that. And that person’s name is:

I know I know but the thing is, what you should understand is I enjoy talking of politics as I enjoy other things in my life too, say, scratching rashy skin or picking the tiniest of hangnails or waiting about to vomit when nauseous.

There are friends, bloggers, and other people as well who say this to me: “Harry, why don’t you ever write about President Donald Trump in your blog?” They deserve an answer, I believe, and so this is it. If you choose to continue reading and why not, then you may notice my answer comes in three parts.

First, I have nothing to add to the discussion. I lack what might be called a novel angle.

There are authors I like and musicians and songwriters and draw-ers of the visual arts. It is not too much a thing to say that their art takes me to astonishing places and makes my life worth living, or nearly. Yet these very same geniuses – geniuses! – I follow on twitter from time to time and their shared thoughts on the American President are, I believe this is the right word, prosaic. Yes, prosaic. The words could just as easily ooze from the mouth of some fungible Democratic strategist on MSNBC, whatever it is “strategist” means.

The disappointment is too much for me. It’s that I want the political thoughts of these geniuses to be as transformative as their art, to twist my mind into new and novel shapes, to make me see the world as though newly born. You see?

Disappointment is a terrible thing and far too common and I would never wish to inflict such a thing on you.

Second, and this is important, you’ll see many of the readers who come here come from faraway-and-possibly-fictional countries such as Netherlands and India and Canada. If I am being honest, mostly from Canada. I am certain or almost certain these readers have already gotten their lifetime’s fill of talk of President Donald Trump.

Third, I will not bring the circus here. I refuse. It is as though it’s on point of principle. There’s a thing which President Donald Trump does and the thing is to be a kind of PT Barnum and he makes a circus where much of the circus is just angry people yelling about him. The angry people yelling about him, I believe it is a big part of his act.

The circus is unavoidable almost. Omnipresent. There’s another word I mean to say but cannot think of just now.

This blog I made here is never going to be a part, or maybe a ring I guess, of the circus of President Donald Trump. No. I will write of breaking a key in a lock or of crossing a street or of staring at a fence instead.

President Donald Trump is missing from this blog and that is how I would like to keep him thank you very much. I weep for having brought him here even in passing. Let’s try and pretend this post never happened.
blogs politics trump