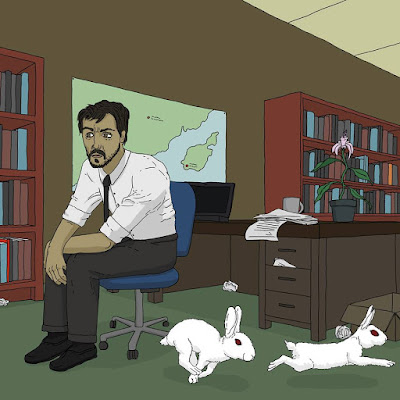 I was driving down Fairview Street when the man with the big head saw me. His eyes were too too wide and to me, being in the moment as I was, as we all are mostly, I suppose, the eyes appeared as though bloodshot. To a degree which would concern me, were they my eyes, anyway. A doctor may disagree with me on this.

I was nearly home. His car pulled out around me and that’s when I saw his big head and his probably problematically bloodshot eyes and he was spitting on his own window shouting he was so angry.

“I just want to go home,” I said to him, though uselessly as there was no way the man with the big head could hear me.

It’s music, mostly. It’s like this: In my home, I find an album – an album always, an ambient album sometimes, a classic rock album rarely, your favorite album never but an album which makes shapes and colors nearly every time – and I climb down inside that album like a rabbit hole.

When I am down inside the album, Astro watches me from very far away. I push my fingertips into my navel. I pull and then I push up into the inside, slowly, being very careful especially of the liver and the assorted intestines until I come to my anger-stone. My anger-stone’s got to be removed obviously and it must be left down inside the rabbit hole when the song ends. Don’t worry, this does not injure the song.

(An acid folk album some days. A kraut rock album almost no days.)

And then for a few hours or a day or a few days, I can’t say how long, exactly, I never know and it can hardly matter to you, at any rate, I’ll be just fine until somebody says something like “Did you see that the President is locking babies inside of cages?” and I’ll be angry again so I’ll feel my stomach, and sure enough, the anger-stone has climbed back in when I wasn’t looking.