This is the part where I tell you about why I haven’t been writing.

After two weeks working full days at the pro se assistance office, my brain began to rewire itself. I knew that my brain was rewiring itself; I could feel it happening. Of course I could. The dreams, you see they were a dead giveaway. Lots and lots of docket sheets. So very many docket sheets you would not believe it. Docket sheets have filled my dreams more than any person ever’s, maybe.

There was a night I awoke because, in this waking world, Astro was leaping off my bed and my dreaming self feared I’d neglected telling him how and where to file an answer to a lawsuit. But cats are sued only rarely and even more rarely represent themselves in court. It was just my brain rewiring itself. Like I said.

After three weeks working full days at the pro se assistance office, I stopped commenting on other people’s blogs. It’s just there wasn’t time: Forty interviews a day, angry people crying out when I cut off the line. It was as though I worked on an old-timey assembly line. I lost track of whether Beach Bum had posted Chapter Six of his “Misanthrope” story. Of what word art Magaly’d made out of a doily and some leaves.

Life changes – don’t let them tell you otherwise – but for better or worse, who can tell?

After four weeks working full days at the pro se assistance office, a moment never came when I was not tired. Weeks slid together. I fell asleep eating at a restaurant when my family took me out for birthday dinner.

I told you this was the part where I’d tell you about why I haven’t been writing. Or, rather, precision is important here, I’ve been writing sometimes, but I have not been planning the writing. Thinking about what I’m going to write. You know what I mean. This explains if not excuses recent posts about staring at fences and, I don’t know, whatever the blazes that was two weeks ago.

Those posts were not yet ripe because they were not planned because I was too exhausted to plan because for the past five weeks, I have worked full days at the pro se assistance office.

I feed Astro. I feed myself, or most of the time I do. I fall asleep in a chair reading The Brothers Karamazov and listening to Lucrecia Dalt’s Anticlines.  I work full days at the pro se assistance office.

And then I repeat. 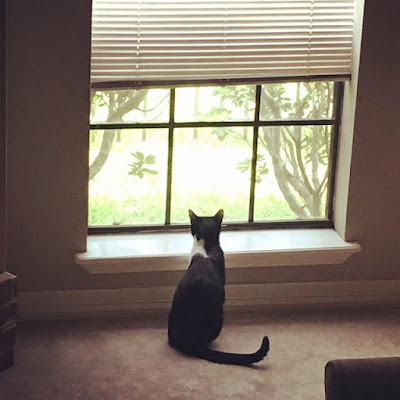