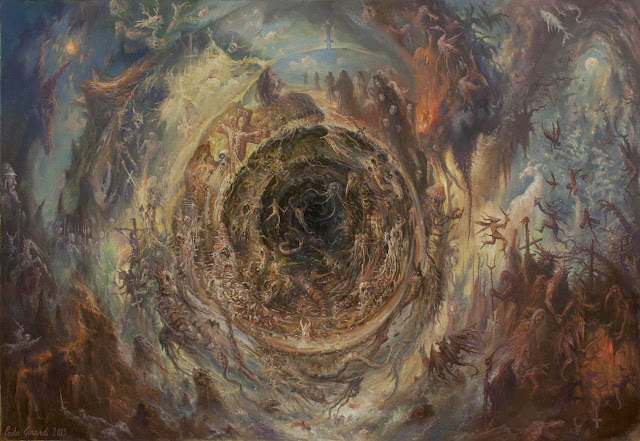 And the elevators were, well, they were like intestines, I guess you could say, and we kind of pushed down ch-ch-ch, only maybe not always down, in what felt like peristalsis. It got harder for me to read my book.

“I TOLD you you had to see this!” Blind Father Tom said and then the elevator doors came open and then we saw holy people all around. I suppose they were holy people. Some holy people you can pick out by their garments and their very specific hats. Others are richer with impressive pinstriped suits and you know them from the t.v. All of them were there and they’d all gathered around a cage.

At first, I mistook the man in the cage for my friend, Gerber, but it was not Gerber. He had the same eyes as my friend and the same hair, and the same charisma and the robe but no.

The man who wasn’t Gerber was saying this: “My message does not change in a cage.” He said, “I am the same in a cage or on a mountaintop or in a board room or on a seashore.” I believe I’m saying that right. I’d hate to get him wrong. “Keep me in this cage and beat me and still I’ll respond with love. Love is all there is. When I succeed in showing you that, well, there will be no cage and there will be no beatings.”

And I was trying to read but Doctor Wren-who-says-dude-a-lot, right beside me, said, and loud too, “Dude, are you being held against your will?” to this man in this cage. I’d maybe hoped for a bit lower profile since we weren’t even supposed to be there.

The man in the cage responded. He said, “I want to be wherever you all want me to be. You are all my brothers and sisters. We learn together and in our wake go ever-growing peace, love, and wisdom.”

And when they’d run out of questions or else gotten the general gist of the answers, at least, the Cardinal stepped forward and he said, “We must go now, oh Lord, but we thank you for revealing to us today, as you did so long ago, our true natures and our place in our Universe, and”-

“Bullshit!” said a voice that was not my voice and for this I was grateful, as you can probably imagine, for I do not like to draw attention to myself but would rather, always, go home and think about a thing that has happened and then maybe blog about it, much later on, and quietly.

It was not my voice. It was Wren’s voice.

“Bullshit!” She said it again.

Blind Father Tom shushed her and a lot of people gasped and the Cardinal, looking stern, said, “Excuse me?”

Wren said, “Has this little caged dude or any of y’all dudes ever actually met the Universe?” At least I think that’s what she said because just at that moment I got really, really into reading my novel, but I think she said, “Colliding stars and black holes and genocide, old folks’ homes, decay, and entropy? This dude and his love schtick’s gonna get creamed hugging a kitten in a crosswalk somewhere.”

“Young lady”- said the Cardinal but then he too got interrupted by the sound of a key clanking against the bars of a jail cell. It is worth noting here, since I haven’t already noted it, that by this point in the story everyone but me, Wren, the Cardinal, and the dude in the cage – I mean to say the man in the cage, of course! – were down on their knees.

And the man in the cage said, “No, I think she could be right. You guys don’t” – he looked around at the kneeling holy people surrounding him – “You weren’t all thinking I was, you know…”

He said, “Hey, I say pleasing things. I’m the ‘Do unto others’ guy, right? ‘Love your neighbor as yourself’?”

He said, “But now, if it was the Mad Conductor you were hoping to meet – though I honestly can’t imagine why you would want to meet Mr. Plagues and Volcanoes – I can make a call and…”  he held out his arms.

“Dudes, get out of here! Run!” Wren said and I had to follow her, mostly because she’d pulled the iPad from my hands and gone off running towards the elevators. Somehow, Blind Father Tom kept up with us.

From behind us there came a high-pitched noise and then some screams and a squelchy sound. After the sounds and just as we got onto the elevator, the smells of infection and rot hit us. It is not too much to say I was glad the three of us were leaving.

“Maybe we should go back to check if there’s anything left of the Cardinal,” said Blind Father Tom.

But we did not go back and check and there wasn’t anything left of the Cardinal anyway, and I had missed my afternoon nap with nothing to show for it, to boot. The elevator rose.

“This is why I never go out anymore,” I said.
conductor father tom wren