The ramparts: A blogaversary 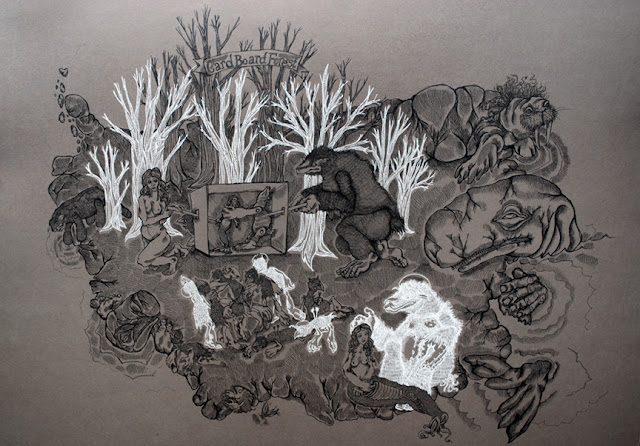 David Bowie’s bats could fly but not of their own volition. No, not with a flapping of the wings and a great leap up. Not with a running start like a plane on a runway.

The little bats were, as it were, like all bats in that they had to fall into flight, so David Bowie built a shelf from which his bats could hang and fall. He took the shelf and he took the bats and he brought them out on tours with him, even on the “Glass Spider” Tour which was not a career peak of his by any means but hell, he was still David Bowie, even in the nineteen eighties.

On a night in Kathmandu after the show, David Bowie went back to his hotel room. He had a box in his hotel room and he reached into the box. He took out a red square and – you see, I’m trying to make this complex thing simpler for you – unfolded the red square out to make a door, then opened the door and walked through. Inside was David Bowie’s secret room which was very ornate with shiny gold frills and obscure embroideries too.

I’m guessing he’d spent most of his “Let’s Dance” money on it.

But barely had he gone in to sleep when he heard something outside the red door. Inside the hotel room. And it was a tiger. David Bowie knew the sound a silent tiger makes. This was that.

He climbed out a window and he brought the bats with him, of course. To escape. It was night out there and not just night but a Kathmandun night which is exceptionally dark in a kind of inky black-out sort of way I might write about some more sometime. Anyway the moon came out soon enough so it got brighter but David Bowie and the bats knew the tiger was coming.

Through a forest now, full up with gnarled, skeletal trees but mostly cardboard in the end, for he could spy the thin edges of the silhouettes as he passed them by. The tiger got close, then further away, up ahead, behind, playing with them almost, really, because a tiger is a fucking cat.

I’m getting to the part at the gate, it’s just taking longer than I expected. Don’t pressure me.

They saw the castle when the moon came out. Off in the distance, it stood there with towers and parapets and other castle parts like ramparts, which is a delightful word I think. Ramparts. I wish I had more occasion to use it.

David Bowie knocked at the castle gate. He said “Hello?!” and he said “Excuse me?” and he said “Is there anyone home?” A light turned on then, in the castle, I mean to say, for someone surely had heard David Bowie call out. Perhaps even recognized his voice. When someone came out, it was Marlene Dietrich and she was wearing a tuxedo and a top hat and smoking a cigarette in one of those long cigarette holder things that look so fancy they can make you forget about the cancer sometimes.

David Bowie said, “It seems my bat friends and I are being hunted by a tiger tonight. I was wondering if we might come into your castle until it passes.”

Marlene Dietrich watched the bats a long time, for so long in fact David Bowie wondered if she’d even heard his question. But she had heard his question because she said, “I’ve been wondering where Murray the tiger wandered off to.” Then walking up to her, a very formal-looking antelope approached on its hind legs balancing a silver tray on a front hoof and on the tray were two glasses of champagne.

Marlene Dietrich took one of the glasses, gave David Bowie and the bats one last look, and then she left. The antelope handed or hoofed David Bowie the other glass and followed her.

David Bowie was heartbroken because he’d wanted Marlene Dietrich to show him how to wear a tuxedo and a top hat and how to smoke from one of those long cigarette holder things and also because he didn’t want to be eaten by a tiger. He tried to drown his sorrows in the glass of champagne but it was a very small glass no good for drowning, and besides that, someone had left a laser pointer at the bottom of it.

Now armed with a laser pointer, which, really, is the very best weapon to use against a tiger because a tiger is just a fucking cat, David Bowie got the predator chasing after a red dot across a moonlit mountain range ten miles away from him. It was gone. David Bowie and the bats too raced back to the castle to maybe have another go at Marlene Dietrich. But when they got there, lo and behold, the castle was burning and Marlene Dietrich and all of her animal servants were inside, burning too.